Scholars already knew the German philosopher signed up to the Nazi party. But that doesn't mean nothing can be learned from his thinking
Domenico Losurdo theguardian.com, Wednesday 19 March 2014 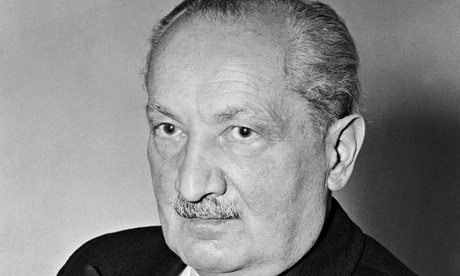 The scandal provoked by the publication of Martin Heidegger's notes and reflections between 1931 and 1941, currently underway in Germany, is truly stupefying. The philosopher's "black notebooks" (schwarze hefte) were so-named after the colour of their covers; and now we find out that they are black above all in their content. But is this so surprising?
Yes, we do have the confirmation that immediately after Hitler's coming to power Heidegger signed up to the Nazi party, and that he did so nourishing excited hopes. His outlook in the first place concerned Germany: "the German people is now on the brink of rediscovering its own essence and making itself worthy of a great destiny." After the country's defeat in the first world war, the German people were, he thought, going to experience a triumphal renaissance, saving the world from catastrophe and, above all, from Bolshevism. For Heidegger, indeed, the promises of regeneration implicit within Nazism went well beyond German borders: it had been called upon to realise his longed-for "destruction of modernity", putting an end to the egalitarian massification which had, of course, seen its most ruinous expression in the October Revolution, but had begun long beforehand with the advent of liberalism and democracy. And, if Heidegger's hatred for Soviet Russia was boundless, what reigned supreme was his low opinion for the Anglo-Saxon world...
Leggi tutto
Pubblicato da Domenico Losurdo a 11:39