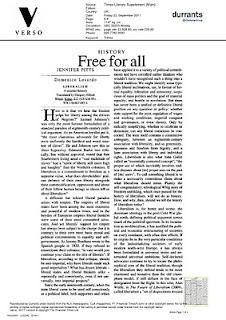 Dear Professor Losurdo
First of all, the very existence of this review is good news, so let me congratulate you for it.
As to substantive questions, the thing that strikes me more is that, of course, we can go on and on indefinitely talking about issues when it is mostly matters of definition that are involved. And so, apparently Jennifer Pitts didn’t like very much your definition of Liberalism, hence she suggests instead a… lack of any exact definition, so that all that is retrospectively considered “good” is susceptible of being taken as an expression of Liberalism, whereas “bad” things tend to be illiberal ex definitio. This way, of course, “Liberalism” gets identified with endless, indefinable “meliorism”, with improvability itself. That is to say, that which others would identify with Humankind, or “human condition”, she associates with Liberalism. And so, of course, facing logomachies like this one, game over, let us congratulate the winner, Ave Jennifer, etc.
There is, indeed, a deep rhetorical component associated with such forms of arguing. As William Jefferson “Slick Willie” Clinton has once put it, “there is nothing wrong with America that may not be corrected on the basis of what is right with America”. Something I would hardly disagree with, of course, since I’m very far from sustaining some “final solution” for any “American problem”. But then again, the same thing goes, of course, for Burkina Faso, Paraguay or New Guinea… although you don’t hear that kind of stuff so often about Burkina Faso, Paraguay or New Guinea, do you? (And, by the way, the people of these countries do not talk of them as equivalents to “Africa”, “America” and/or “Oceania”…) And so, why is it that “America”, alias the United States of America, tends so emphatically to extract collective vain glory from such “arguments”? Is there a ground to suspect that fact is associated with “America” becoming known as the “liberal” country par excellence?
The one thing to consider, concerning Liberalism, is the fact that “Liberal” appears first and foremost as opposed to “Mechanical” (arts), like “noble” as opposed to “plebian”/“banausian”. Akin to that distinction comes, of course, the notion that “liberalitas”, corresponding to a middle-of-the-road position, or a “juste milieu”, is to be distinguished from both “avaritia” and “prodigality”. Liberality is generosity, yes, ma non troppo. If you think that the plebs ought to be treated generously, you must also consider that the plebs also lives cruel, brutish and short lives, objectively submersed in scarcity, and therefore mentally in “avaritia”. Generosity is and ought to be of the happy few, for the happy few and by the happy few only. If you try to universalize the condition of these you necessarily incur into vice, into “prodigalitas”, and the social fabric will obviously crumble…
There are, of course, alternative, different ways of thinking, and probably the real “litmus test” to be made consists of answering the question: “is that a way of life susceptible of be made universal?” And as to that, sorry, dear Jennifer, political correction notwithstanding, the basic problem with Liberalism is not its conviction that its “own culturally particular beliefs, values and practices are universally valid”, but in a sense the exact opposite to that. It is mostly about its “leisured class” - hence restricted or exclusive by definition - basic attitudes and forma mentis. Ah, but in practice it was historically not so exclusive? Yes, indeed. But that is so because other “black beasts” were involved in the real story: radicalism, Jacobinism (not just of Haitian or black Jacobins but of all of them, let’s not get once more carried away by political correctness), socialism, communism, “Stalinism”, etc. With a minimum of good will, I am sure that an encomiastic discourse may be elaborated about each and every one of these (one that emphasizes “meliorism” or improvability, with no need for “us versus them”, etc.) much, much more easily than about Liberalism.
(To be continued)

(Continuation)
But no “white book” contra “black book”, please! No hagiography versus damnatio memoriae, on and on and on… The delicate ears of Jennifer find the use of “redskins” as “jarring”, and she also feels tempted to draw some more women thinkers in the global picture of historiography in cases where there were only a few of them in reality, since a minimum percentage is known to have to be attained… Ah, but let us leave all that, please. Jennifer doesn’t think questions of choice, even sometimes tragic choice, are the correct ones to formulate? The very liberation of the happy few has historically, statistically been associated in a direct way with the subjugation of the many, but we should decide to ignore that fact? Let me, therefore, remind her of Isaiah Berlin’s emphasis precisely on the frequent need of tragic choices (The Originality of Machiavelli) and at least hope that the fact it was “liberal” Berlin to express that idea, and not Domenico Losurdo, makes it somewhat less jarring, who knows?
But maybe Berlin’s reasoning is indeed also itself an overshooting. Maybe those being “tragic choices” within some institutional or cultural context, a liberal one, for instance, become susceptible of being made “non-tragic” choices, or indeed overcome, in some other, non-liberal context. Let us call that a “Jacobin” context, for instance, as a way of homage to the illiberal ones that first stood for unconditional abolitionism, universal suffrage, universal public instruction, progressive taxation and unconditional (constitutional) social rights. At any rate, any historiography concerned mostly with realities - and not with cant - should have to at least consider that basic, immensely stubborn fact…
Indeed, strict counterfactuals being of course impossible, the clearly identifiable mainstream is a tendency of “Liberals” (any and all of those claiming to be that, or being retrospectively “read” as that) to think of Liberty as “our” liberty, to praise not rights of Man, but the rights of the Englishmen… briefly, to think of Liberty as a “Privilege”, as a “private law” applying to but an exclusive group of insiders, be them a class, a “group of status” or, in final scenario, and under pressure from radicals, as a nation, via imperialism.
Briefly, in case of lack of such “external” pressures, Liberalism “naturally” tends to its “ideal-type”, that is, aristocratic republicanism, the classic credo of the “Optimates”. Inasmuch it cedes to “radical” pressures and gets (partially) democratized, enfranchisement of certain segments of population or as to certain aspects of life in society tend to be accompanied by disfranchisements of other segments and/or concerning other aspects of life.
Those are the big facts that you identified so well and pointed out clearly enough, or at least so I thought. Sorry, but no review that avoids or obfuscates that central argument is entitled to pretend to be a good one.
Saudações cordiais,
João Carlos Graça
Lisboa, 25 de Setembro de 2011